You can watch LINE TV on mobile phones, tablets, and PCs.
Just enter tv.line.me on your desktop or laptop browser!

Find all the latest and most popular videos organized
into categories including Drama, Music, Entertainment, Beauty,
Animation, Sports and more. You can also sort videos by play count,
recently uploaded date, and Like counts in each category.

BE A FAN OF YOUR FAVORITE PROGRAMS

If you want to subscribe to your favorite channel, just tap the
'Fan' button and you'll be notified any time something new is
added to that channel. Go to 'My List' and check the 'Updated' menu tab for updates. Also, check out the 'Fan' list to see
which of your LINE friends like the same programs you do!

WATCH YOUR PERSONAL PLAYLIST OVER AND OVER

If you want to save a video to watch later, just tap the
“Watch Later” icon on the video player. LINE TV remembers
the exact point in the video that you pressed the button,
so you can always continue watching right where you left off.
(This feature is available on the mobile app only.)

Control the volume and brightness of videos with your fingertips.
Also, LINE TV's smart video player automatically adjusts
your settings to the best video quality for you.
Meet the smartest video player around on LINE TV!

Jump to navigationJump to search

'U' is a song by South Korean pop group Super Junior, and is the group's follow-up release to their debut album Twins. The single topped CD sales charts during the first several weeks after its release on June 7, 2006.[1] 'U' peaked at #1 on the monthly MIAK K-pop album charts and sold 91,416 copies by 2008.[2] The song won a total of five music recognitions, being Super Junior's most successful single in the music charts until the release of 'Sorry, Sorry' in March 2009. Sunn amp serial number lookup. Promotional performances for the title song, 'U', did not complete until September 2006. The last general performance for the song was in August 2007 in Tokyo, Japan.

Since the Korean release of 'U' in 2006, there has been two more releases of 'U' in two different languages, Mandarin and Japanese. The Mandarin version of the single's title song 'U' was released in a special Taiwan edition on June 15, 2007. On July 9, 2008, 'U / Twins' was released in Japan, which included a Japanese version of 'U' in the limited edition release.

Super Junior-M, Super Junior's Mandopop subgroup, also released a cover of 'U' on April 8, 2008, marking it the second Mandarin version and third remake of 'U'. In this version, however, the lyrics were changed completely from the first Mandarin version. Also, new incorporations of a new jazz swing style with new acoustic guitar arrangements and an added hip-hop dance bridge and violin bridge were added to make the song suitable for the Chinese language while keeping close to the original Korean pop vibe.

Prior to 'U', Super Junior was known for their member line-up, a concept very similar to Japanese girl group Morning Musume. Certain members of Super Junior's first generation were to be switched out and new members were to be added, which would form a second Super Junior generation. However, after the addition of a thirteenth member, Kyuhyun, the group ended their status as a project group and began to release productions as a group with permanent status. 'U' is Kyuhyun's debut single.

Composed by Norwegian composer Ken Ingwersen and British musician Kevin Simm, the song was promoted to be a song of 'pure pop and dance' with contemporary R&B influences and harmonization.[4] The rap lyrics of the song were written by Eunhyuk, in which the rap is divided to two solos, the first half for Eunhyuk and the second half for Kibum. Donghae also rapped in the background of Kibum's solo.

Several remixed versions of 'U' were performed, but none of them were released as official singles. One remixed version of the song contains a dance bridge in the middle of the song right before the rap, and another version had the song completely mixed, creating a different pop vibe throughout the whole song.[4]

'U' became one of Super Junior's biggest hits. 'U' yielded number-one spots for five consecutive weeks on two of Korea's top music programs for the first time in the group's career. The song was crowned as SBS Popular Songs' Mutizen Song of the week as soon as it was released, being the first award for the group since debut. The song then stayed as Mutizen Song for three weeks on the same program, also simultaneously grabbing two top awards from M.NET's M!Countdown for two weeks. Before promotions for 'U' ended, 'Dancing Out' was released on July 23, 2006 as part of SMTown's annual summer album, grabbing two awards as soon as it was released. 'U' gained critical success, and Super Junior collected over seven awards in five of South Korea's top music award ceremonies as 2006 came to a close, winning Best New Group and popularity awards.

Since the single's release, the song 'U' had won Super Junior over five notable music awards. Super Junior won their first award since their debut after the release of 'U' on June 25, 2006 as the SBS Popular Songs Mutizen Song, and stayed as Mutizen song for three consecutive weeks. The single also won Super Junior the Best New Group at the prestigious M.Net/KM Music Festival on November 25, 2006. The single has since earned more awards.

The music video for 'U' contains only scenes of the Super Junior members performing their group dance. Yoona of fellow SM Entertainment group Girls' Generation provides the only female role in the music video.

The four-minute video mainly consists of the thirteen members performing their choreographed dance. Much popping, sliding, and waving were used in the performance, like many of Super Junior's other street dancing techniques. Chest movements and hip movements are heavily used and the pelvic thrust is also used in the dance, which became a famous action in future 'U' parody dances.

'U / Twins' is a Japanese CD single released by Super Junior to commemorate their first Japan fan-meeting at Nippon Budokan in Tokyo and to celebrate the grand opening of their official Japanese website on April 1, 2008.[7] It was released in Japan on July 9, 2008. The single peaked at #4 on Japan's Oricon Daily Chart on day of release, but dropped down four places in its second. The single was notable for being the first Korean single to be listed in the top 10 of Japan's Oricon Weekly Chart.[8] 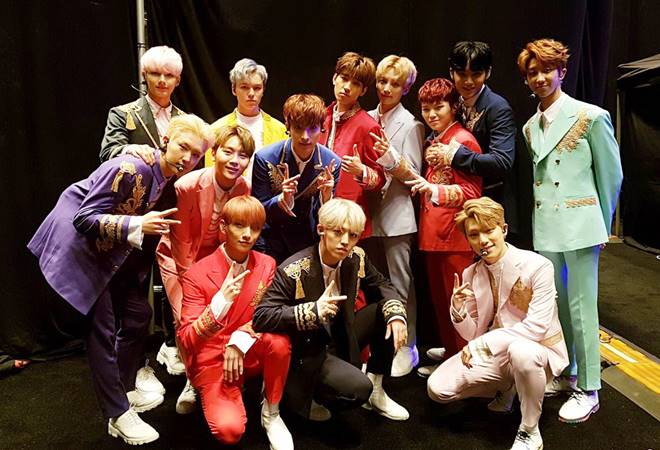 'U' is one of the twelve tracks featured in Super Junior-M's debut studio album, Me, which was released in April 2008 in China and South Korea, and later throughout Asia in May 2008. Super Junior-M's modified version of 'U' contains heavier bass instruments, a closer musical approach to hip hop and jazz. The song also has extra music bridges, such as a violin bridge performed by Henry (reminiscent of Super Junior's Don't Don) and an added dance bridge, which makes the song almost a minute longer than the original Korean release. Super Junior member Yesung appears in the song as a stock vocal as his parts are originally from the original Korean version of 'U'.

The dance choreography for Super Junior-M's 'U' is also completely changed from the original. The choreography contains a variety of styles, such as different elements of street dancing and jazz dance to complement the maturity in the song, which slightly differs the image from the main group. The music video features the now f(x) member and leader Victoria, with her face dominating the mirrors, and the Super Junior-M members searching for her presence.

Retrieved from 'https://en.wikipedia.org/w/index.php?title=U_(Super_Junior_song)&oldid=891038810'
Hidden categories:
Jump to navigationJump to search

Swing is the third extended play (EP) and fifth overall release by Mandopopboy bandSuper Junior-M, a sub-group of the South Korean band Super Junior. The EP consists of six songs, which were released for digital download on March 21, 2014 in China and Taiwan by S.M. Entertainment.[1][2][3] The group released the album in Korean music sites, such as MelOn, genie, Naver music and more, on March 31, 2014.[4]

This is the final album to feature Henry as a member before his departure on April 30, 2018.[5]